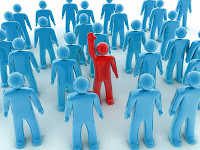 How many times have you doubted yourself? Is there a creeping self-doubt that almost always comes out when you need it the least? You may be doing just fine by everyone’s standards, but no one can deny the debilitating effect that nagging voice in your head can do. Today, you finally get to conquer the demons inside your head, stop sabotaging yourself, and be on your way to positive personal growth.

Sociologists call your imaginary audience the “generalized other”—that abstract group of people to whom you constantly seek approval. This is your Everybody Committee—what you think the people will say in general in response to your every action. If you’re afraid to speak in public, that’s because you fear what the committee will have to say about you. If you can’t leave home without your Ray Ban, that’s because you’re so sure the committee will scoff at you. The Everybody Committee is ordinarily composed of the cruelest people whom you’ve allowed to hurt you and prevent you from reaching your dreams—and, as it happens, you’re giving them the best possible access to your mind.

Who are the people in your committee? Many people’s Everybody Committee are composed of an aggregate of their Religious Committee, Intellectual Committee, Materialist Committee, and several others  whose judgment is so important that they make sure to stop and consider what they will probably say before doing or saying something.

Obviously, this is not a great way to live. It’s terrible having to second-guess yourself whenever you want to do something that’s genuinely you. The only way you can move on and be a truly happy person is by rooting these people out of your Committee. So go ahead, list out these individuals whose harsh treatment of you have since stuck on your mind, and leave them out of your Committee. They’re no longer part of it.

The “generalized other” will always be there. You will never stop thinking of what other people probably have to say about what you’re doing. So instead of letting the cruel ones get into your Committee, chose those that have loved and supported you through and through. These are the people whom you always come back to, and who are always there to show their support of you.

Once you have your new committee formed, keep coming back to your list regularly. Are these people still supportive and helpful to you? Are there new people who should probably be on the list? Recreating your Everybody Committee every now and then is the best way to reaffirm your lifestyle choices and feel good about yourself.