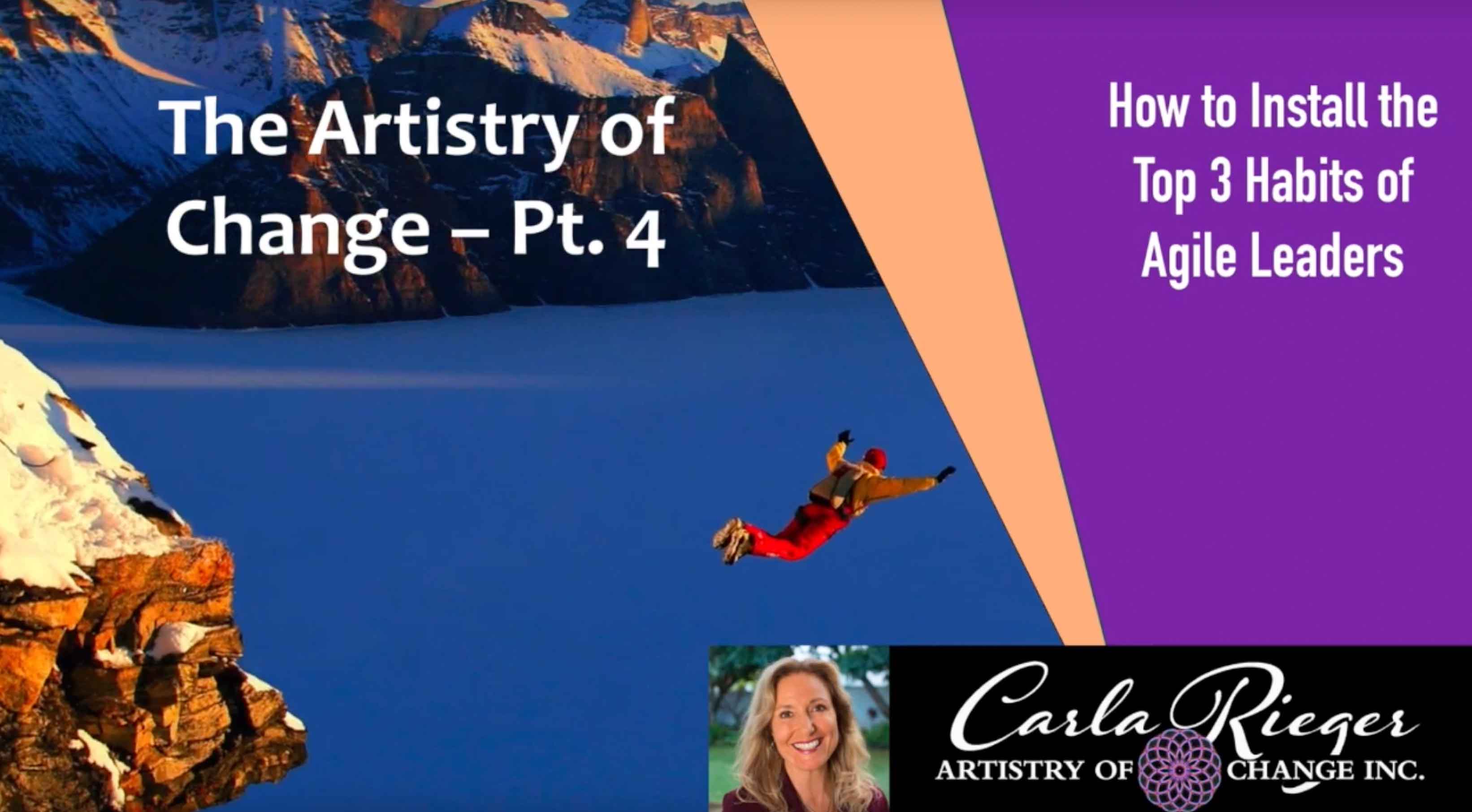 How agile are YOU as a leader? In our research, agile leaders can easily innovate under pressure and think outside the box. Non agile leaders tend to only think of solutions they’ve heard of before. Habit #3, therefore, is the ability to choose your capacity instead of letting it choose you. The three habits are cascading, meaning one affects the next one. In other words, once you’ve chosen your state, it changes your perception and THEN it dials up in your capacity to be innovative.

Do You Remember How to Solve this Puzzle? 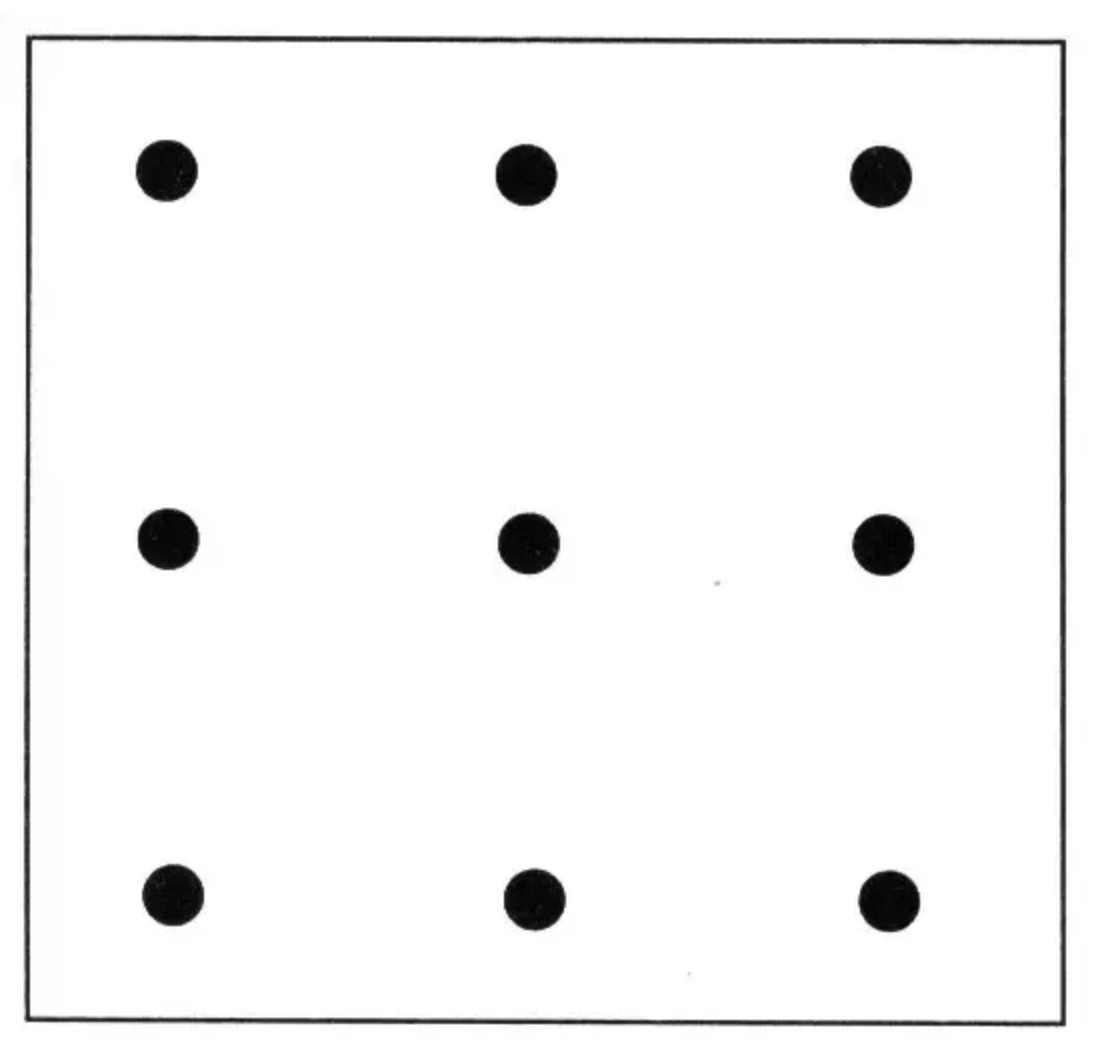 Do you remember how to solve this puzzle from the 1940s, where you must draw four straight lines through all nine dots? You have to draw outside the box. That’s where the term “Think outside the box” came from. When they first offered this puzzle to the public in the 1940s, what percentage of the population actually could do it? It was only about 2.3% of the population.  The problem is that our education system teaches you to comply, to draw inside the lines and NOT to think outside the box. That’s why so often you’ll ask a group of people to be innovative, and hardly anyone can do it.  People draw a blank. It’s simply bad subconscious programming, because it’s a natural human ability. That’s why you need to trick people to come up with ingenious solutions to problems. If you can do it quickly, that’s even better. Here’s a way to do that.

What Conditions Help People Think Outside the Box?

How did that test go? Was it hard? Easy? Energizing? People get energized by being creative, if they’re allowed to think outside the box. Most people have a subconscious phobia about truly being creative. There are certain conditions, however, that help people do it, such as no bad ideas, put aside your job role, brainstorm in a group, have a time limit and a specific focus. It also helps to precede the problem solving by doing something fun like a paper clip brainstorm. Why these conditions? Sometimes people in a front line role won’t offer ideas because they haven’t been asked. Yet, they may see things that a manager doesn’t see. Any idea goes, helps them feel safe to share their ideas without repercussion. Two heads are better than one, and eight heads are even better, so involving others in the problem solving is very helpful. A specific time limit and topic helps the mind focus. You don’t want to ask people to come back to you some day with a good idea for your business. You’ll never hear back from them.

I’m sure you’ve been in a meeting where one person shares an idea, and somebody else says, “We tried that last year. It didn’t work.” Even if they’re not trying to be rude, happens is that it dampens innovative thinking. In fact, if you could watch a brain scan of the person who shared the idea, you’d see their survival brain get triggered, which cuts them off from their creativity. Others watching the interaction may also get triggered and clam up.

It’s important to have a period of time where any ideas goes first. It’s a small habit that makes a huge difference, whether you’re problem solving by yourself or in a group. For example, we worked witha manufacturing team and they had a huge order that they didn’t have time to fill. The first thing they did was a paper clip brainstorm, which put people in a fun and creative mood. Then, they switched the focus to – how do we make the deadline on time? They made a big list, any idea goes, for 10-20 minutes. Each person was encouraged to offer the dumbest idea, the most politically incorrect idea, the weirdest idea that they would never do in a million years. Once they got that all out of the way, it opened the doors to just outside the box ideas. These are often the unusual ideas, but that are actually going to work.  Then, and only then, do you vote on the best idea – depending on your decision making style.  If you allow people to vote on the idea they most support, you tend to get more buy in. Then, you just assign who, what and when.

If you think this might work for you, you can download the New Solutions Brainstorm Worksheet HERE.  It just helps you structure the process for getting the most ingenious ideas from people. You state the issue, the ideal outcome, then brainstorm, then choose and actionize. Literally I’ve seen people come up with brilliant solutions in 10 minutes, if you use a structure like this. If you try sharing an idea then discussing its merits right away, it will take forever and people will get frustrated. It’s a little habit with a big result. Feel free to try it or give it to an emerging leader for them to try, and they’ll thank you profusely.

To book Carla Rieger as a SPEAKER or TRAINER for your meeting go to: https://courses.carlarieger.com/book-carla-to-speak/

Pt. 3 – Reframe Your Challenges – The Top 3 Habits of Agile Leaders