Ask for a Woman to be Your Grad Speaker

Probably one of the most important speeches a student will hear in life is the one spoken during the graduation ceremony. The commencement speech gets the student geared up to take on the real world.

Men continue to dominant the speaking world, especially those giving commencement speeches. Yet, statistics show that women now make up 60% of college graduates even though they are only 51% of the population. Also, women are starting to earn more right out of college than men. It only makes sense to have more women as speakers at graduation ceremonies and here are great examples of successful ones. 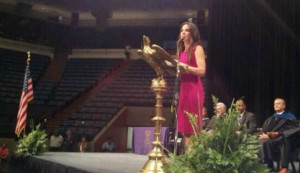 Bullock has inspired many graduates by telling them to take on whatever makes them happy even if it seems challenging. She faced a lot of rejection before becoming successful in her career and many times she wanted to give up. To stay the course, she chose to focus on the joy of the work itself rather than the end goal.

King battled with many inequalities and discrimination as a female athlete. Without meaning to, she became an icon of the women’s liberation movement when she won playing tennis against Bobby Riggs in the Battle of the Sexes. What she always tells students is to keep learning, learning how to learn and being an avid problem solver. Those are three main things that gave her inner as well as outer success.

The first solo female anchor of the “CBS Evening News,” Couric interviewed some of the top leaders from around the world. She shared with graduates that, at the beginning of her career, she was criticized for the way she looked. They also said her delivery lacked gravitas, which she decided was Latin for ‘testicles.’ She credited her endurance and eventual success to staying strong despite the naysayers, working hard and just putting in the time necessary to get good.”

Does the woman speaker need to be famous?

No. As long as she has a potent message that will inspire young minds to greatness. Celebrity speakers can be “beyond the budget” of some post secondary institutions. That said, sometimes a celebrity will donate their time to their alma mater. Make sure, whether they’re famous or not, that they stay to interact and talk with the students and their families after the event. It can make a huge difference.

Need a female speaker for your event?

Check out the roster at The Women Speakers Association.

Or, you can check out our offerings HERE.